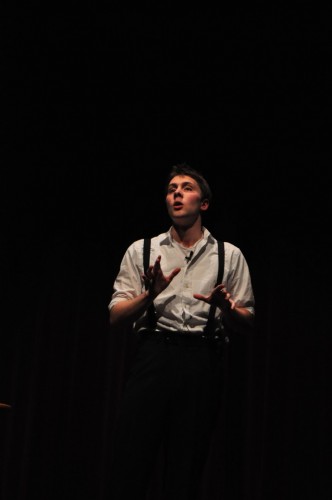 Ever since Connor Bryant was a toddler, stepping into someone else’s shoes has been second nature.

When he was three years old, he would memorize lines and reenact movies.

“It takes a lot of kids a while to separate the fact that what they’re seeing on the screen isn’t real,” Connor said. “I understood very early on that you can have a job where you dress up and pretend to be somebody else and people watch you, and I was very attracted to that.”

“Since I can remember, we’d always play games and they’d always be acting [games]” Gabrielle said. “I’d always play the sidekick because he made it seem like the best role to have.”

Connor, who graduated from MHS in 2012, has always seen acting as something not just to do in life but something he could completely become.

Connor played multiple roles throughout his high school career. He performed in the shows “A Midsummer Night’s Dream” and “Inspector Hound.” Connor’s senior year, English teacher Kelly Haut took over as the theatre director. That year, Connor had lead roles in “Beyond Tolerance,” “A Seussified Christmas Carol” and “Dracula.”

“All of his hard work has paid off,” Haut said.

Connor is currently attending Southern Oregon University in Ashland where he is a theatre student.

Connor recently scored the lead role in the SOU production of “Our Town” where he played George, a young boy of 16 who the audience grows up with throughout the play.

“George is very sweet and honest, and his only love in the world is baseball,” Connor said.

As the play progresses, George becomes a young man.

“He slowly begins to fall in love with the girl next door [Emily], and they were kind of made for each other,” Connor said. “George isn’t particularly bright, but Emily is.”

In the fall, SOU put on two productions.

In order for Connor to earn a role in “Our Town,” he had to audition for both shows.

“For an audition piece, I did a scene from classical American theatre similar to ‘Our Town,’” Connor said.

A couple days later, callbacks were posted. Connor returned to the theatre where he had another audition process. This time there were fewer people.

“I had a callback for [characters] George Gibbs, Simon Stinson and Sam Craig,” Connor said.

“I was very pleased. I really wanted to be in the show,” Connor said.

According to Connor, it is a significant thing to be cast in a college play as a sophomore.

“The other actors and I are really close. Auditions are really positive and it’s not really cut throat,” Connor said. “Everyone genuinely wants people to do well in this department and succeed.”

“Acting is a passion and it’s a part of who he is,” Bruce said. “I am very proud of him, and I’m glad he is pursuing his passion.”

Gabrielle is waiting for the day when Connor is on the big screen in Hollywood.

“He promised me when he wins an Oscar that I can come and watch him receive it,” Gabby said. “I’m going to hold that to him till it happens.”