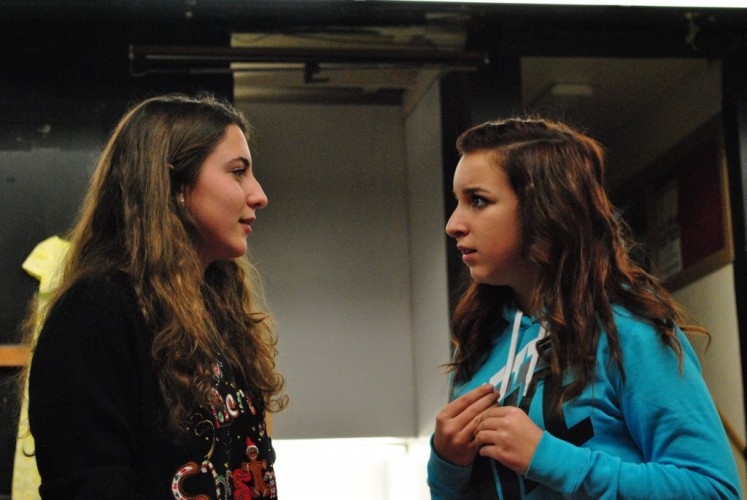 Every Thursday at lunch, magic happens. Students give birth to wizards, babies

transform into Voldemort and Sherlock Holmes attends house parties. These things are made possible in Allison Bassett’s improvisational theatre, or improv, group in the drama lab.

Improv is a means of responding to randomly generated scenarios in a quick-witted, comical way. Senior Christian Chase, an active member of the group, said the games played in improv are theatre-based.

“At improv we play theatre acting games that are made up on the spot,” Chase said. “It’s kind of wild.”

Even though improv is a form of theatre, it is much more accessible to the general public.

“Improv in itself is something that anyone can pick up quickly without having a lot of background,” Bassett said. “You’re goofing off anyway most of the time, and now it’s just in a structured setting.”

“I feel like it’s a really good way to express yourself, really anything that pops into your brain, you just do it,” Bibey said.

Bassett said students should have an outlet for humor during the week.

“People at this school seem to be looking for something they can just sit and enjoy for half an hour and not think about anything else,” Bassett said. “People just come in there and watch because they get to laugh.”

The group meets every Thursday during lunch hour. This time was selected due to the scheduling conflicts of both the students and the instructor.

“People at the school have been having trouble finding times to fit in classes that they love to take because their schedules are so packed,” Bassett said. “Improv made more sense than trying to fit something else [theatre-based] in during lunch.”

Although improv is primarily a venue for students to let themselves relax and have fun, it also has serious benefits for the participants.

“I used to be not very personable, I used to never want to get up in front of crowds and do things,” Bibey said.

Bassett also sees the growth in the young comedians.

“Doing it [improv] every week . . . those people are now more likely, in life, to be more confident in situations that maybe they didn’t feel so confident in before,” Bassett said. “If you’ve been there week to week, you can see that they’ve improved as a whole.”

The group has grown in size from about 10 participants upwards to 30. However, they still want more students to get involved.

“Improv is a great thing to do,” Chase said. “We need more participants.”

At their current rate of growth, Bassett said she hopes the lunch activity could turn into an actual club or extracurricular event.

“I would hope that maybe some students would get inspired to do improv nights [at a local coffee shop] or an improv club,” Bassett said.

Bibey said any way to express oneself does good for the audience and those performing.

“If you get to express yourself in any way, that’s a great thing for yourself and for others,” Bibey said.