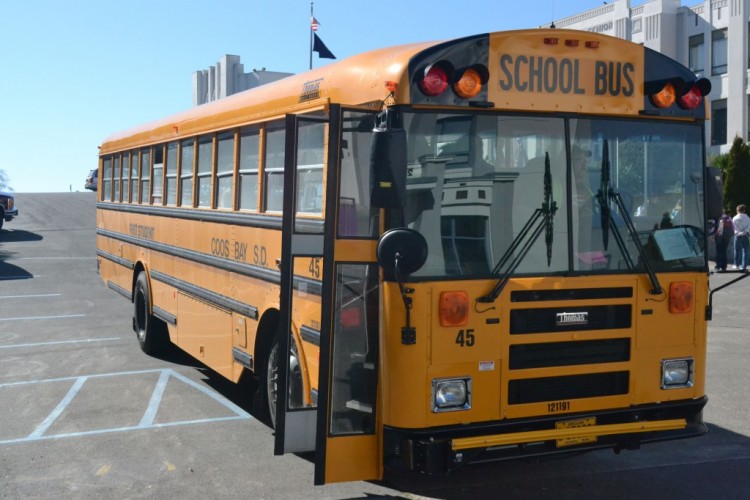 After many years of students involved in activities, athletics or field trips traveling on the white Pirate buses, they were recently replaced with new buses.

MHS Athletic Director Bryan Trendell said the buses had put in a lot of mileage and were causing various safety issues on the road by leaking and breaking down. The seats also reclined, which is against the First Student bus code, the company which provides busing for the Coos Bay School District.

“We had too many incidents where the buses broke down,” Trendell said.

According to Becki Mascarena of First Student, who helps coordinate travel in the district, the buses were purchased because they were due to be replaced after 15 years on the road. Mascarenas is excited the bus drivers seem to like the buses and that they are very safe.

“The drivers really like them so far,” Mascarenas said. “They have great visibility.”

“I think any time we can keep our fleet current, in regards to safety, it is a good thing,” Mulkey said.

While the buses are considered the safest on the road, some athletes have mixed feelings about them. Varsity basketball player Colton Thurman, a senior, does not like them at all and is disappointed with the new models.

“They are exactly the same as the yellow buses except the seats are split,” Thurman said. “They don’t even recline.”

“The seats are too small and uncomfortable. There is no room to put your stuff,” Burton said.

According to Mascarena, the yellow buses were also purchased so they could be used as route buses in emergency situations. They were also less expensive.

“In the times we are in, it was good for our district to buy some cheaper and safe,” Mascarenas said.

Mascarenas hopes the students will learn to appreciate the new buses even though they may not be the same quality as the former Pirate buses.

“They have all the latest technology, are safe, the bus drivers like them and we hope the students will as well,” Mascarenas said.