The Marshfield Times • May 12, 2016 • https://themarshfieldtimes.com/688/sports/bringing-skateboarding-back/ 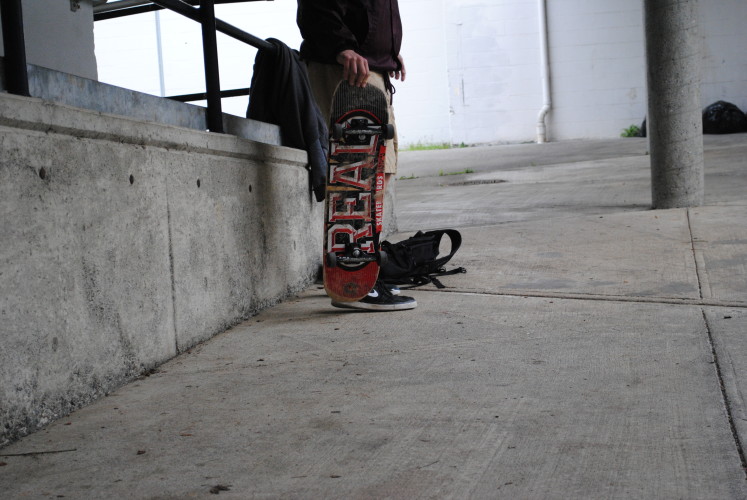 Some Marshfield students are getting on board with skating.
The concept of skateboarding was invented in the 1940s and continued to grow until it gained nationwide popularity in the 70s and 80s. People choose to skateboard for many reasons, including for recreation activity, as a mode of transportation or as an extreme sport.  Skating is still prevalent today with many students at Marshfield. Skating has been the target of negative stereotypes over the years and is often associated with “skate punks.” However, it is becoming recognized as a legitimate sport.

Senior Bojames Weatherston said he started skating at a young age because he thought he would enjoy it.

“I started skating in third grade,” Weatherston said. “I just thought it would be fun.”

Weatherston said he can do a number of tricks.

“I can kickflip, heelflip, tre every once in a while,” Weatherston said.

“[I started skating] probably about fourth grade,” Bibbens said. “I started seeing the older kids do it so I wanted to try it myself.”

Bibbens said he enjoys skating because of the feeling it gives him.

“It kind of makes you feel free,” Bibbens said. “When you’re just walking you’re not really flowing. When you’re on a board, you’re flowing.”

Weatherston said he also enjoys the feeling skateboarding gives him.

Senior Justin Gerhardt said he started skating at a young age because his friends had become involved in it.

“[I started skating] in fourth grade because all my friends were doing it and it seemed like the coolest thing to do,” Gerhardt said.

Gerhardt said he enjoys the sport for the sense of accomplishment it gives him.

“I like skating because it’s awesome landing that hard trick that you’ve been trying to learn,” Gerhardt said.

Gerhardt said it is very enjoyable, especially if one is talented in the activity.

“You get like a rush and it’s fun. If you’re good at it, it’s really fun,” Gerhardt said.

Weatherston said it was difficult at first.

“It’s always a struggle in the beginning, but you will get better as you go,” Weatherston said.

Bibbens also said it was not easy in the beginning.

“If you quit out you’re not going to get any better so you just keep trying,” Bibbens said.

Weatherston, Bibbens and Gerhardt said they like skating in the Mingus Park Skate Park and also riding “street” around town.

Gerhardt said some younger kids are also getting into the sport.

“A lot of freshmen have started to skate lately but they’re not very good yet,” Gerhardt said. “It just takes practice.”

The Mingus Park Skate Park was built in 2009 and is constantly filled with skaters of all ages and people riding similar devices like scooters, BMX bikes and occasionally roller blades.

According to orcities.org, the Coos Bay Ordinance on skating states nobody is allowed to ride a skateboard on any street, other than a recreational street, except while crossing at a designated crosswalk, ride in the downtown area or on any parking lot, ride in a reckless manner, and must yield right-of-way to any pedestrian or motorized vehicle.

Punishments for violations of these laws include impoundment of the board, minimum fines of $50 up to $500 for first conviction for a violation and enhanced penalties for subsequent convictions.

However, despite the laws and restrictions implemented on the activity, some will not let their passion for the sport be restricted.

Bibbens, Gerhardt, and Weatherston said they will ride until they die.

“I plan on skating until I have a gray beard,” Weatherston said.