Remembering some of the greatest athletes in MHS history (Mac McIntosh) 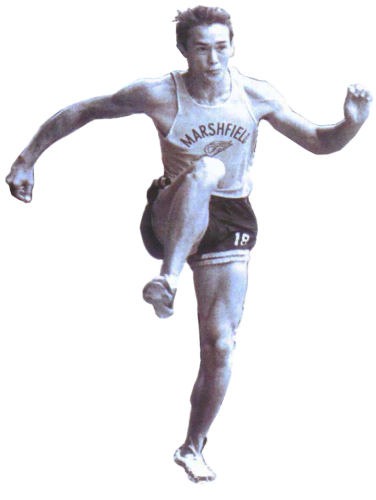 While at Marshfield, McIntosh set the school record in the high hurdles during 1971, which was broken by Blake Kemp in 2011. McIntosh coached Kemp at the time. McIntosh was a state champion in the high hurdle event and placed second in the low hurdles. Even though the champion false started, he was not disqualified, although McIntosh’s coach Stan Soloman tried to reverse it for years.
After graduating from Marshfield, McIntosh attended the Air Force Academy where he was the top hurdler all four years. By the time McIntosh was a senior, the school had four All-American hurdlers, including himself. McIntosh and his teammates set a world record in the 240-yard shuttle hurdle relay. He was also the captain of the team in 1975. McIntosh then had a 30-year career in the Air Force and has run four marathons in his life. The first was at age 40 to prove he could, and the last at age 50 to run with all of his cadets. McIntosh has been the head coach of the Marshfield track team for the last five years.
McIntosh came to Marshfield as a sophomore and said his greatest memory of the school is meeting the love of his life.
“My very first class was honors English. I sat down and she noticed I was new and asked who I was,” McIntosh said. “She had this huge smile and was just a great looking girl. It was something about her enthusiasm. I had this image in my mind of what a perfect girl would look like and it all just clicked,” McIntosh said.
Although McIntosh set a world record while in the Air Force Academy, his greatest accomplishment is unrelated to personal success.
“All of my individual achievements pale in comparison to the 2009 state championship boys team,” Mclntosh said. “When kids that you work with become successful, that is ultimately the most gratifying athletic experience and is much more gratifying than anything I do personally.”
McIntosh credits his success and coaching style to his previous coaches and work ethic.
“Winning is a habit, trying is a habit, losing is a habit,” Mclntosh said. “Pete Susick taught me how not to quit and that is the most valuable thing I’ve ever learned.”