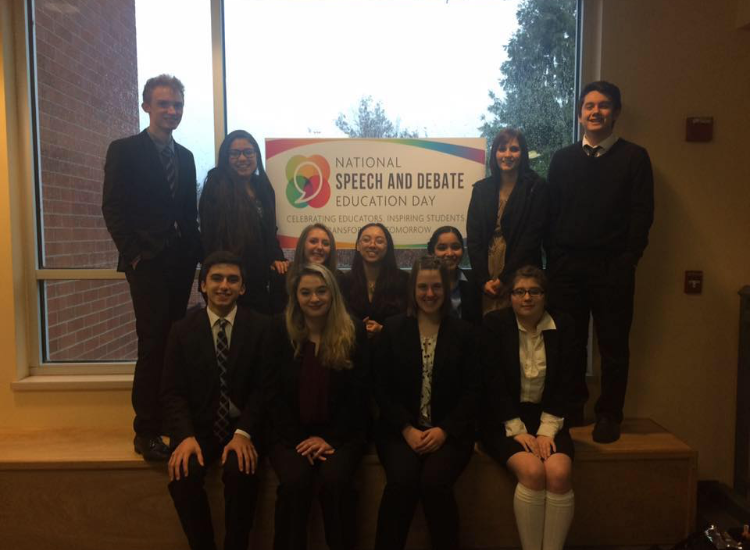 The Speech and Debate team has entered their qualifying tournament season and one student already accomplished the goal of making it to the national tournament.

Last weekend, senior Rachel Simon qualified for the tournament in congressional debate. It will take place on June 18 in Birmingham, Ala.

“Congress itself is congressional debate, where everyone who is in it acts as a congressman or woman, so you have two houses of representatives and a senate,” Simon said. “I was in one of the houses and I guess I was the best speaker.”

From nuclear energy to reviving dinosaurs, congressional debate can include a variety of topics. Simon said the team had about a week to prepare their arguments on bills and resolutions that were to be used in the debates.

The team took eight other members to the tournament, which included a three hour debate session in the morning, a one hour lunch break and a three hour debate session in the afternoon. Other attendees from Marshfield include Shyanne Bolton, Jeremy Bess, Jorda Harlow, Jessica Baimbridge, Trevor Moen, Ashley Warrick, Arianna Herrera and April Platt. Along with congress participants, Jace Sperling and Riley Kirby also attended the tournament to compete in the Big Questions debate.

Sophomore Trevor Moen said he debated on a bill about bringing dinosaurs back from the dead and although he did not deliver as many speeches as he wanted to, he was okay with his placing.

“After the tournament, I was really tired,” Moen said. “I didn’t do as well as I wanted to, but it’s alright because it’s not really my main event.”

Moen will perform in dual interpretation and public forum debate at the second national qualifying tournament on March 17.

Other team members will be performing in remaining events as well on this date.

According to Simon, the research done by other teammates who went to the tournament were vital to her success. Simon said because of the way the team splits up research, she would not have been able to qualify without them.