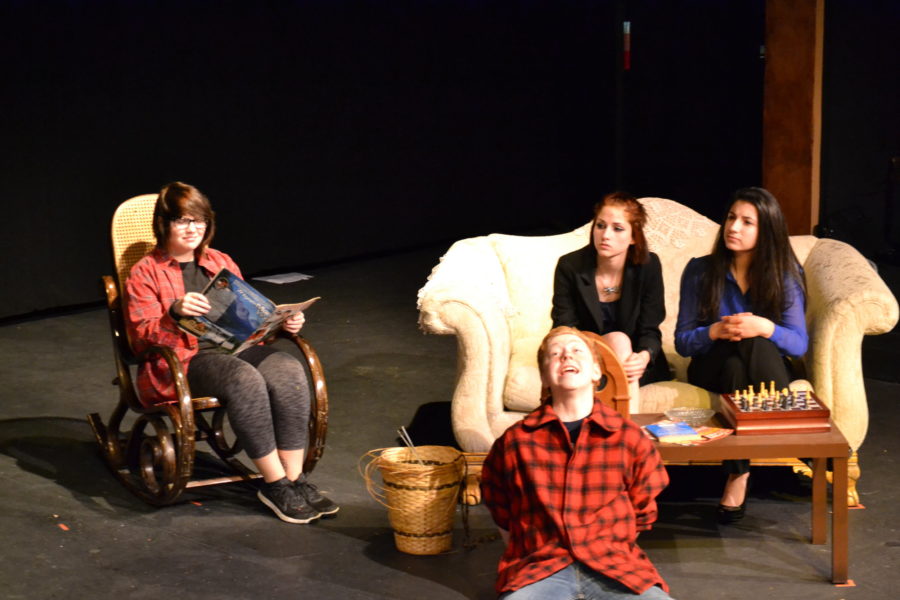 Be prepared to be fully immersed in the showing of the production “Death and Taxes” as the audience participates in every moment of the performance.“Death and Taxes” is a murder mystery, comedy and audience participation play set in the small town of Hendricks where a lifeless body has been discovered. It is up to the city council and the town folk to figure out who committed the crime.

The production will take place in the Marshfield Drama Lab this weekend, Dec. 16-18, with Friday and Saturday shows beginning at 7 p.m. and Sunday’s matinee at 3 p.m.  It is directed by new theatre teacher Will Paget.

According to Paget, he chose the play because he did not want to direct a hard-hitting drama for his first production. He wanted the students to perform a comedy and do something the drama department has not done before.

The cast rehearses every day after school and, according to Paget, it has been going a lot smoother than he expected. He said the cast is really getting into their characters and all the specifics of them.

“My favorite part about the play has been the rehearsal process and getting to know the kids more, on a deeper level,” Paget said.

Paget said he hopes after working in the play, the cast members gain friendships and grow in their art form because it is obvious acting is something that many of them are passionate about and will be something they talk about after high school.

“In the play he makes jokes about everybody and it’s not really apparent as to why he is there,” Zousel said. “He just shows up to all the town meetings.”

According to Zousel, it has been enjoyable working with the rest of the cast and rehearsals have also been exciting.

“The hardest part so far has been trying to figure out my character personally and getting in my mind set of why he is there,” Zousel said.

The drama department has not done an audience participation play in many years. Zousel said he has enjoyed thinking about what the cast will do with the audience interactions.

Freshman Brianna Giacomini is a first year drama student and will be performing in the play as Kathleen Lyles.

“My character is the mayor and she is supposed to be very stylish and around 45 years old,” Giacomini said.

Giacomini said her first high school play has been an enjoyable experience because of how welcoming the rest of the cast was as soon as they began rehearsals.

“For me, the hardest [part] of the play has been just getting into my character and the different mannerisms that she has,” Giacomini said.

Paget said he is looking forward to sharing his first production with the school and community.

“I hope that when the play is all over, the audience will laugh and be talking about the funniest moments they saw, but will also be talking about how they thought the culprit was someone else because the cast had done a good enough job acting,” Paget said.