The Marshfield Times • May 24, 2016 • https://themarshfieldtimes.com/649/arts-amp-entertainment/jungle-book-movie-review/ 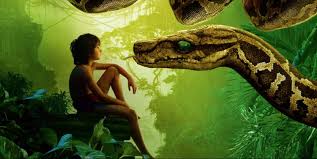 If you’re looking for the bear necessities, or just want to forget about your worries and your strife, then pull up a movie seat because the new adaption of “The Jungle Book” is a surprisingly satisfying take on a classic.
The story begins with Mowgli, the “man-cub,” racing through the jungle with his wolf clan host family and his guardian, the black panther named Bagheera. The movie that this is one of the driest seasons. Since it was so dry, the water hole was declared land at peace. The antagonist Shere Khan, the Bengal tiger, seeks revenge against mankind and sets out to kill Mowgli. As the dry season comes to a shriveling end, Mowgli sets out on a journey to the “man village” for safety. Along the way he is manipulated by con artist Baloo the bear, hypnotized almost to death by Kaa the anaconda and blackmailed by King Louie the orangutan.
The movie finds a balance between both children and adult enjoyment. With the characters more realistic looking, adults were lured in.
However, the one hour and fifty-five minute movie could not cover all of the book. The movie’s main drawback was that it only included two songs: “The Bear Necessities” and “I Wanna’ Be Like You.” Unlike the first movie, these songs were not fully completed.

The film’s main message mirrored that of the book’s: individuality. Each group of animals represented a stereotype from the jungle, but Mowgli did not fit perfectly into any of them. Shere Khan represented those who were not able to adapt to change. Everywhere Mowgli went he did not fit in, but would always manage to improve things for those around him. For Baloo, it was Mowgli’s “trick” rappel the cliff and grab the honeycombs that were out of reach. He helped rescue a young elephant out of a pit. Mowgli’s individuality helps everyone and only adds to Shere Khan’s anger. In the end, every group saw Mowgli as Mowgli and not as a wolf cub or monkey man. The group, seeing that Mowgli was different, believed in the good that they all did: “The Law of The Jungle,” rose up against Shere Khan’s evil tyranny.
With director Jon Favreau’s ability to deepen the themes and capture the emotion of the audience to powerful levels, the update on the classic book was a success. Favreau challenged the common idea that the book is always better by making the film genuinely witty and tender for all to enjoy.