The Marshfield Times • May 16, 2016 • https://themarshfieldtimes.com/612/features/from-spain-to-the-oregon-rain/

From Spain to the Oregon rain 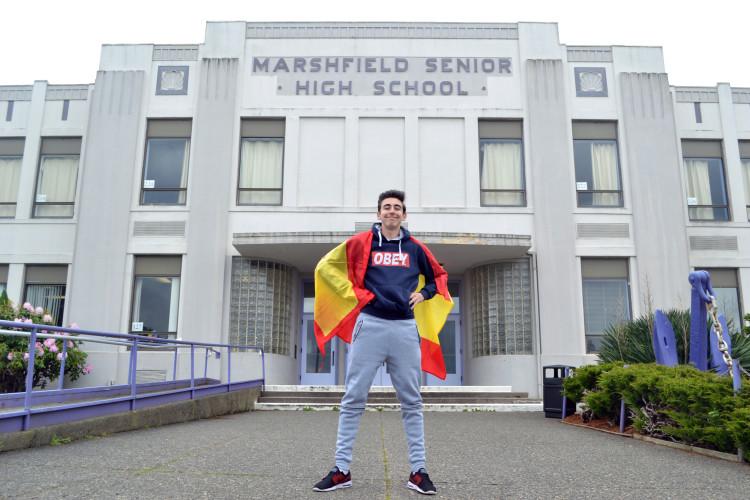 Pablo Cordobes has spent the last eight months away from friends and family in Spain so he can learn about American culture first-hand.
Cordobes grew up outside Madrid, Spain with his parents Jose Luis Cordobes and Antonia Fernandez and his sister Rocio Cordobes. His father works as an architect and his mother is a judge’s clerk.

Cordobes said he Skypes with his family almost every Sunday to catch them up on how he is doing.

“At first, I was really shocked because it’s one year, one year without your family, without your friends and with a new family that you don’t even know,” Cordobes said. “I’m so grateful for my host parents and the friends I have. They made my life much easier here.”

Junior Samantha Waldrop has known Cordobes since the beginning of basketball season and said he is very fun to be around.

“Pablo can be weird sometimes, but he cares about people,” Waldrop said. “His understanding of American culture is getting better every day.”

In Spain, Cordobes attends high school at Enrique Tierno Galvan and according to him, it is very different from high school in America.

“There is a huge difference because here, there are a lot of sports to do and fun things to do,” Cordobes said. “In Spain, you just go to the classes because it’s just what it is. You go to high school for your studies. If you want to do band or play a sport, you have to go to private lessons or a club.”

Cordobes said high school is more fun in America, and at times he even wishes there was school during breaks.

Cordobes has taken classes such as integrated math 3, biology, U.S. history, sports conditioning and radio at Marshfield. As an adult, Cordobes said he plans to be an English teacher.

“I really like radio. I think it’s very useful for you because we don’t have any of those classes in Spain. I think I learned a lot about radio and I really like the teacher, Steve,” Cordobes said. “He is really nice and helps people with their problems. He wants people to learn stuff.”

Radio advisor Steve Walker said Cordobes brings energy and positivity to the class and is fun to be around.

“He calls himself the international sports announcer,” Walker said. “He gets along very well with everyone; he has a smile on his face almost every day.”

Walker said there have been several special moments with Cordobes in radio class, including when he asked a girl to prom. He said Cordobes wanted to make it memorable since they do not have a prom in Spain.

“He spent about a week making a poster,” Walker said. “Everything had to be the exact right shade of yellow, the right colors, he was very picky and it was just fun to watch. He set it all up and asked the girl in radio during the class.”

Cordobes became a three-sport athlete at Marshfield. He began the year playing soccer because it was familiar since it is a major sport in Spain.

During the winter, he played basketball and made the JV team. Cordobes said it was exciting and a good experience. Currently, he is a member of the track and field team.

“And now I’m doing track and field. It’s my first time doing it and I’m having fun,” Cordobes said. “Sometimes practices are hard, but there are a lot of people there and I made a bunch of friends there and it was pretty fun hanging out with them.”

Since being in America, Pablo has also visited national landmarks including Central Park, Time Square and the Statue of Liberty.

“When I go back to Spain, I will miss the people the most,” Cordobes said. “I just made a lot of friends here and I just can’t think that I’m going to leave here and not see these people again. It makes me really sad.”

Cordobes said he hopes he has the opportunity to come back and see his host family and all his friends. He also has considered being a host parent himself one day.

“At first I wasn’t sure, but I thought it would be fun and I don’t regret what I did,” Cordobes said. “This is probably the best year of my life.”