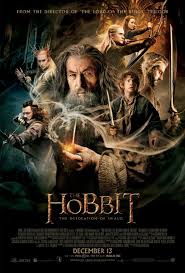 The long anticipated sequel, The Hobbit: Desolation of Smaug, premiered on Dec. 13, making up for the first one’s slow beginning. Peter Jackson brought to the screen an exciting, action-packed film, which the theater loved. After the disappointment of The Hobbit: An Unexpected Journey, Desolation of Smaug lives up to Peter Jackson’s reputation and quality that people are used to.

The Hobbit: The Unexpected Journey is the first of the movie trilogy of The Hobbit by J.R.R. Tolkien. Both series exist in an imagined world called Middle Earth, a vast land filled with hobbits, wizards, elves, orcs and many more mythical creatures that appear throughout the stories. The Hobbit takes place before the classic tale of The Lord of the Rings Trilogy. In The Unexpected Journey, Bilbo Baggins (Martin Freeman), a peaceful hobbit from The Shire; was confronted by Gandalf the Grey (Ian Mckellen) and was offered the job as the ‘burglar’ for Thorin (Richard Armitage), the Erebor heir; and his company of dwarves. The company trekked across Middle Earth, to reach Erebor which is under the guard of Smaug, a dragon who protects the vast dwarven treasure. During this half of the journey, the group is captured by trolls, persistently pursued by orcs, and seized by goblins. Bilbo is separated from his companions and meets Gollum, where he out riddles him and obtains The Ring. With his new acquired item, he saves the company.

The story line for Desolation of Smaug continues with the dwarves, led by Thorin; along with Gandalf and Bilbo, on their quest to regain their homeland kingdom, Erebor. Thorin is adamant about reclaiming his homeland, as well as the rest of the thirteen dwarves, and regaining the throne left for him. Bilbo has gained not only his courage, compared to when he left The Shire, but also hides his possession of The Ring. Smaug, voiced by Benedict Cumberbatch, is the malicious, treasure loving dragon keeping the kingdom of Erebor under his composed but heated temper. Smaug expresses his desire of gold and, ironically, his disgust of dwarf voracity to Bilbo.

One of the many highlights of this tale was the barrel battle scene. This scene incorporates the orcs after Bilbo and co., the elves after the orcs, and the company fleeing from the woodland elves. The company displays a sense of unity and camaraderie as they take down the overwhelming forces of orcs collectively and humorously. Legolas (Orlando Bloom) and Tauriel (Evangeline Lilly), two of the woodland elves, are exhilarating to watch as they agilely take down orcs and work together impeccably.

The quality of the film is spectacular; filming took place in the lush landscape of New Zealand. Filming began in Matamata, but moved to various coastal and inland locations across New Zealand. But one could easily believe they are watching Middle Earth itself. Creators of the film, as well as actors, had to pay attention to almost every detail throughout Tolkien’s stories. Tolkien created many languages to go with the various creatures throughout the story, like elvish, khuzdul, the secret language of the dwarves; entish, for the ents, variations of English for the common man and many more. Technology used for the cameras are well worth the use, giving The Hobbit amazing depth and clarity. The Hobbit used 3D Red Epic Cameras, which instead of using 24 frames per shot, like typical movies, they used 48. Using these cameras contributed to making the condition of the film seem flowing and enhanced.

The sequel is slightly shorter than The Hobbit: The Unexpected Journey, with 161 minutes of screen time. Other than the possible length problem some may be opposed to, The Hobbit: Desolation of Smaug has something for everyone within its well written scenes. Between the comedy throughout all races, the battle scenes, and even the well woven romantic storyline between an elf and a dwarf, Jackson keeps viewers constantly entertained and focused on the film with interest and eagerness to the very end which leaves them craving more.