Bandon sculptures will show at Smithsonian 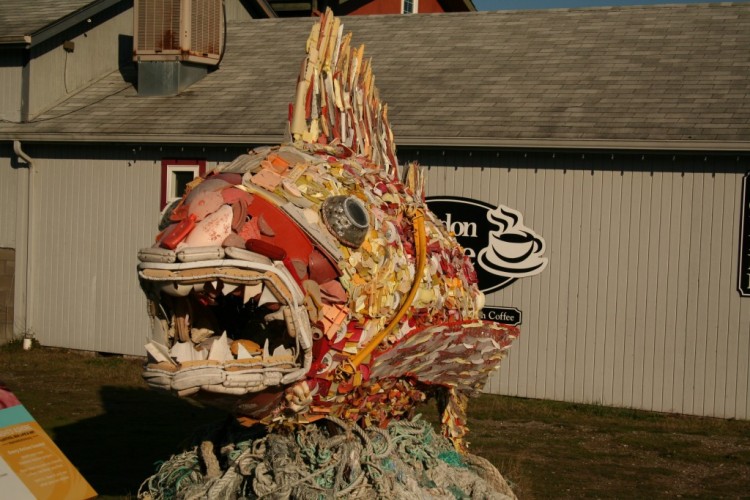 In Bandon, one man’s trash is Angela Haseltine Pozzi’s treasure. Pozzi’s sculptures of marine life made from ocean trash will soon be featured in the three Sea World parks and the Smithsonian.
Pozzi is the founder and lead artist for the Washed Ashore Project, which she started three and a half years ago. Washed Ashore is a community art project that tours around the country to educate people on the importance of clean beaches and to promote awareness toward the massive amounts of plastic pollution in the oceans.
“I didn’t grow up around here, but every summer I would come to Bandon to visit my grandparents and I would go to walk the beach and play in the tide pools. I’ve always been a naturalist, and I fell in love with this area and the ocean,” Pozzi said. “We wish to inform people on the horrible problem in our oceans.”
Since its creation, the project has made over 20 sculptures, each a different species of marine life, comprised of thousands of pieces of recovered trash from beach clean ups.
The traveling exhibit has been making stops all over the country and is currently being featured at their gallery in Bandon. This year, the gallery has had roughly 2,000 visitors.
Recently, the project has been approached by both SeaWorld and the Smithsonian to create sculptures for exhibition. Four sculptures will be created for each of the three SeaWorlds in Orlando, San Antonio and San Diego in an effort to promote pollution awareness.
“SeaWorld found us on the Internet through our website,” Pozzi said. “They said they loved what we are doing and wanted to be a part of it.”
The Smithsonian requested a sculpture and a marine debris education exhibit for their ocean hall. The National Zoo, which is a part of the Smithsonian, also requested the touring exhibit make a stop there after it finishes its tours for the year.
Frank Rocco, Washed Ashore’s development director, was approached by one of the Smithsonian’s education outreach personnel.
“She [Smithsonian education outreach personnel employee] had previously volunteered with the project and then taken a job with the Smithsonian” Rocco said. “She brought it to their attention and they contacted us through our website.”
The Washed Ashore Project has just over 20 people on staff, not counting the thousands of volunteers who help to clean the beaches and collect the garbage. Four of the 20 are on the creative crew, which helps to design and plan the sculptures. The crew is aided by artists who come and go to work on projects for a certain length of time or until that particular project is done. One of the many key members is Mary Johnson, who is the community outreach director.
Johnson is responsible for bringing awareness to the community and schools in the area. She also works to help gather volunteers for the beach clean ups and the assembly of the sculptures.
“The number one reason for doing this is to bring awareness to the pollution problem in our oceans,” Johnson said. “Our slogan is ‘every action counts.’ We want people to be responsible when they dispose their items.”
The project will continue to spread awareness around the country, in hopes that one day it will be taught globally.
“Angela was just invited to speak at the National Marine Debris Conference in Hawaii this year,” Johnson said. “All of the front runners involved in the pollution awareness attend this conference.”
Washed Ashore employees also hope to open up a satellite in Hawaii, just as they have in Homer, Alaska, to help inspire and educate the masses.
“The lesson that we want people to take away from the project is that the little guy can make a difference,” Johnson said. “Everyone can play a major role in the education of pollution awareness.”