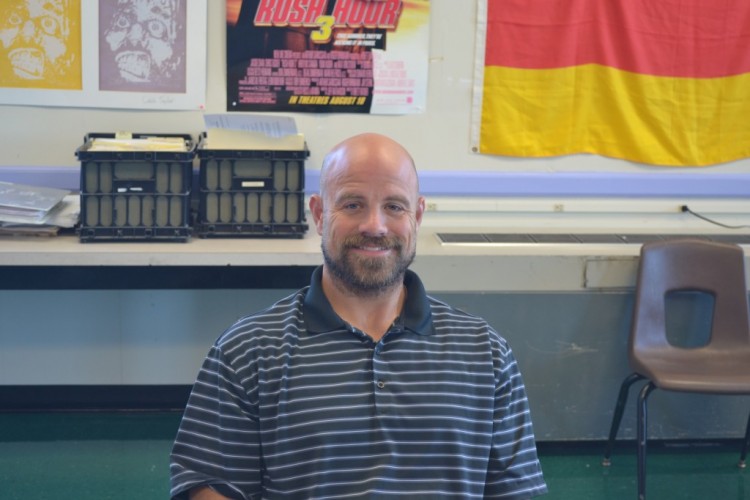 New head football coach Josh Line brings both familiarity and changes to the football program. Line, after 10 years of being assistant coach, replaced Justin Ainsworth, who moved to Alaska to become a high school vice principal.
Line has a rich football background, having played at the University of Oregon as a fullback and a long time contributor with the South Coast Youth Football League. Chad Scriven, an assistant coach and history teacher, said the change has been smooth.

“The transition has been seamless,” Scriven said. “He already knew the strengths and weaknesses of the team.”

After 10 years as an assistant, Line has also earned the respect of many of the players. Senior Austin Howerton, the starting varsity quarterback, expressed his enthusiasm for Line becoming head coach.

“I was excited when he was announced as the coach,” Howerton said. “I knew he would pick up where we left off.”

Although Line is keeping many things the same, he has introduced a major overhaul to the offense.

The players support the changes and feel they will improve as they grow more accustomed to their new offense.

“It was a good change,” Howerton said. “As the season goes on, we’ll get better.”

“It is good to have people helping,” Scriven said. “They bring different experiences. Johnson comes from Sheldon, a winning program.”

When Johnson arrived at Sheldon, the situation was similar to Marshfield, as Sheldon had just finished off a five win season and a three win season the year before. However, Johnson saw Sheldon go to back-to-back state championships and six state title games in 12 years. Johnson said he hopes to see the same thing happen at Marshfield.

“I saw Sheldon improve, and I hope those experiences can help Marshfield,” Johnson said.

Another reason for an optimistic outlook to the future is Marshfield’s recent move to the 4A level. Howerton said the team is more confident because of the move to 4A, and Scriven also sees the benefits.

“This year has been more positive,” Scriven said. “They [the players] realize things are turning for the better.”

Despite being grateful for the move to 4A, Line said it is important to keep the players focused on the rest of the season.

“We are excited about being in the 4A level, but it does not change how hard we have to work,” Line said.

Line said he believes hard work throughout the season and in the offseason will be the major difference in the future success of the team.

“Your results are driven by what you do in the offseason,” Line said. “That will be the difference for us and give us the edge over our opponents.”

Johnson agreed with Line about the hard work needed, and he said he thinks the work done in the weight room will go a long way.

“We are not as strong as these other teams, but that is very fixable,” Johnson said.

The team has gone through highs and lows during the course of the season so far, ranging from their first home win since 2009, to a 55-6 loss to Siuslaw. Line said the team has shown signs of a rising program and believes increasing confidence will help greatly in the future.

“My goal is that we go into this offseason with more confidence,” Line said.

With all the positive changes in the football team, Scriven said Line’s energy and dedication will help the program move forward.

“Josh is one of the most energetic people I have ever been around,” Scriven said. “He is caring on the same level of dedication as coach Ainsworth.”