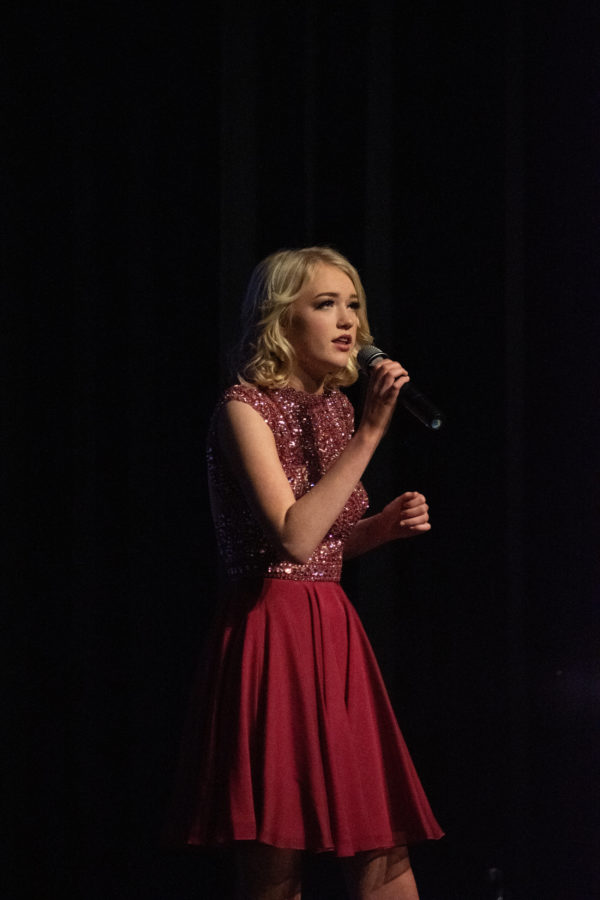 Competing from Marshfield High School was senior Courtney Jeffs for the title of Miss Coos County and Miss Pacific Shores and eighth grader Karli Kennedy for Miss Coos County Outstanding Teen. The local scholarship pageant sold out tickets and was held on Saturday, February 8th 2020. Both Kennedy and Jeffs walked away at the end of the night with several scholarships and one runner-up title.

Jeffs won the Outstanding Effort scholarship of one-thousand dollars. She said she had not been used to competing in pageants and had struggles getting used to the structure.

“This year had been my first year competing in a pageant and I had stage fright at first. However, during practices, everyone was extremely supportive and I had become more comfortable with performing on the stage. Now that the competition is over, I feel comfortable with the stage and I know that I can walk in front of any crowd and present,” Jeffs said.

Kennedy won the first runner up scholarship award for Miss Coos County Outstanding Teen and the Outstanding Interview Scholarship. She said the program had an impact on her life.

“I have been involved in the program since I was six; around six to eight years. I was Miss Coos County’s Outstanding Princess 2013 and I saw how the older girls were so successful in the program and were having so much fun. I, of course, wanted to be just like them, so I waited and waited until I was finally old enough to compete,” Kennedy said. “It was an amazing first year experience. I am 13 and the youngest candidate. The fact that I was able to place so highly and earn so much scholarship money was really such a blessing and an honor.”

The program runs annually and begins practices during late October. Anyone interested can apply through the Miss Coos County website by filling out a form of talent, social initiative, and personal information. Participation scholarships are as well available to those who remain in the program through the end and many other scholarship opportunities are available. Jeffs said she would encourage everyone to take part in the program, as it has many benefits.

“I encourage others to join this amazing program because it is worth everything you put into it. It is truly an amazing program that helps women obtain scholarships for college while also teaching others important life lessons such as patience, teamwork and service. If you are considering joining, I encourage you to go for it, nothing stands in the way of dreams and goals,” Jeffs said.

Kennedy said she enjoyed the process and the relationships she built with the other pageant contestants.

“It was definitely the relationship building with all the girls. Everyone was so nice and so excited to see each other every Sunday. The best part of the show for me was being able to be on stage with my princesses. When I was a princess, my Miss always made me feel so special and I hope I made her feel like a beautiful princess when she was on stage as my Miss made me feel all those years ago,” Kennedy said.

The winner of the Miss Coos County and Miss Pacific Shores receive a voucher to Southwestern Oregon Community College totalling one year of free admission. The two titleholders of the program also move forward in competition to compete in Miss Oregon and eventually Miss America.