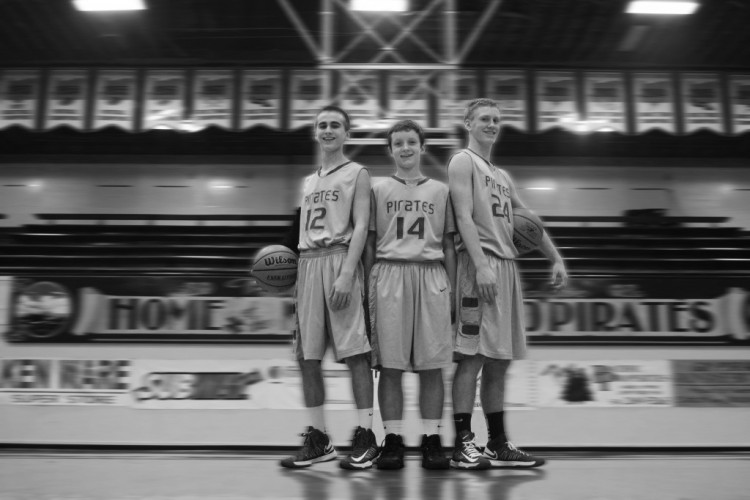 Lifelong friends Justin Cooper, Jake Miles and Rylee Trendell are sharing another experience together. The three are likely the first trio of freshman ever to immediately impact the varsity basketball team. As strong additions to the team, their love and dedication of the sport has allowed them an opportunity that rarely arises for underclassmen.

“Riley, Jake and Justin would be in there for hours playing, knocking Mrs. Cooper’s pictures down many times,” Cooper said.

Upgrading from their makeshift living room court, the boys began playing Itty Bitty Basketball in first and second grade. They continued to play basketball through the Boys and Girls Club, but soon began to crave more dynamic competition. The three formed a travel team with several other friends, coached by Jake’s dad, Doug Miles.

Their athletic ability helped carry them throughout the lower levels of competition and left them with a strong platform for more aggressive high school standards and tougher challenges.

Though confident in their skills, Jake had worries about them playing at a higher level. They faced more intense practices and higher expectations, as well as competing with more experienced athletes.

“Coming in I was a little worried we’d be treated like freshmen,” Jake said.

Despite his worries, the team welcomed them. Rylee felt this made the transition easier.

“It’s not that intimidating because the guys that we’re playing with are fun to hang around and not down on us,” Rylee said.

The boys’ fathers have contributed their time to developing the boys’ skills. MHS Assistant Principal Bryan Trendell, an all-state basketball player at MHS who went on to play at University of Oregon, helped them with learning the fundamentals.

“I’ve coached these boys since third grade,” Trendell said. “They’ve grown up in the gym.”

The three showed their potential early on, receiving recognition from the high school coaches before they were in the program, including head coach Jesse Ainsworth.
“He [Ainsworth] told us the year before just to be ready,” Justin said.

Ainsworth could not be reached for comment for this story, but assistant coach Josh Line, who believes in hard work and dedication when choosing a competitive team, is quick to praise the trio.

“When you’re picking players for your varsity team, you don’t look at how old they are,” Line said. “You look at how good they are.”

Line applauded Justin, Jake and Rylee for their hard work and efforts. He said he is proud to have them on the team and knows they did not get there by chance.

“They’re playing varsity because they’re some of the best players,” Line said.

Their childhood friendship has strengthened over the years and the trio has often spent time together off the court. Although they have grown up with one another, playing on a competitive team and having to rely on each other’s strengths has helped them bond even more.

“I think if I didn’t have Jake and Riley I wouldn’t be as good,” Justin said. “It’s really

nice to have two best buddies on the team.”