Developing team has a bright outlook 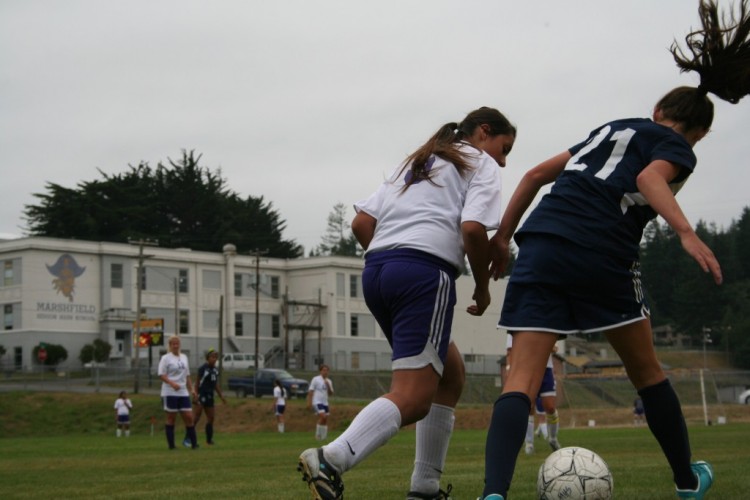 Despite a season with many rough patches, the girls soccer program will strive to improve in the off-season and hope to experience more success in league play in the future. The team’s youth, a new coach and a large group of returning players will contribute toward that vision.

First year head coach Heather Arzie, a former collegiate soccer player, hopes her experience and coaching style will improve the players skills and encourage even more to try out for the team.

One approach Arzie uses is encouraging her players to watch their performances so they can learn to recognize not only their weaknesses, but their strengths, and then use this viewing time to motivate the team to win and come into each game stronger than before.

Arzie believes her players are well on their way to accomplishing this task, noting they made improvement over their previous season. Since most of her team will return, she is excited to see how the program will continue to develop.

Senior Christa Jackson, who was one of this season’s captains, believes the youth of the team, which includes five freshmen, gives them a chance to create a strong foundation for the upcoming years.

Jackson was one of eight seniors, along with Katia Oceguera, Natalie Fleck, Edith Guitron, Matilde Hekne, Leonie Klapper, Anni Ostroe and Jackie Pierce, all of who were acknowledged at the last home game at Senior Night on Oct 8. Jackson said the current junior class is particularly strong in skills, and several of those players have high hopes for the future.

Freshman Daisy Caballero said she is gaining experience from the returning players and hopes the skills she and her teammates learn now will help prepare for the future.

“They’re going to get us ready for when we’re older,” Caballero said.

Arzie has also instilled the sense of importance of building camaraderie among teammates. The players take turns opening their homes to host team dinners where they watch and review their previous games.

“It gives us a lot of time to reflect on mistakes we made,” Jackson said.

Arzie is already looking toward next season and helping prepare her team to compete next fall. She encourages the players to keep playing as much soccer as possible and plans to give them an opportunity to play competitively in the spring.

“We want to get as many girls out for spring team as possible,” Arzie said.

Meanwhile, the players have had time to reflect on their accomplishments this season and look forward to the next one. According to junior Alyssa Stevens, who is also a team captain, the girls battled all season and are proud with the success and progress they have had. Stevens said she used this season to grow as a player and leader.

‘I wanted to improve myself,” Stevens said. “And be a strong-willed captain.”

“I think the younger girls will come back next year,” Zink said. “Next year our team will be really strong.”