Supporting from the sidelines 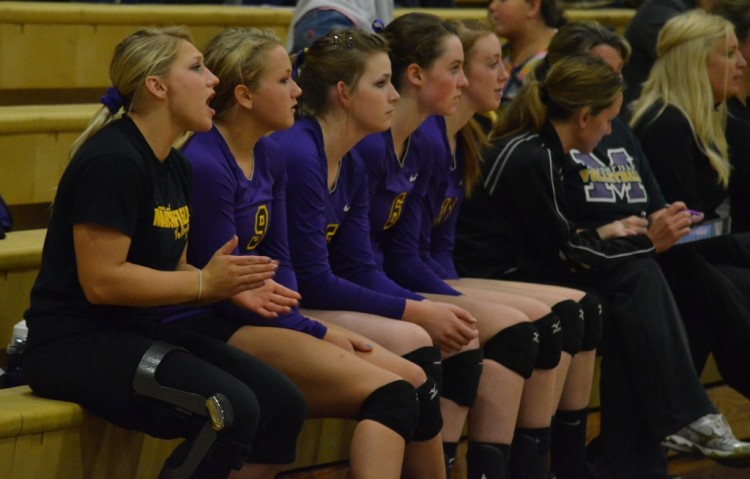 After tearing her ACL last spring, senior Alicia Hatzel was unable to play volleyball this year. Though she cannot participate on the court, she continues to encourage her teammates.

This better not mess up volleyball. These are the first words senior Alicia Hatzel thought after she fell in the Powder Puff football game last spring. Unfortunately for Alicia, this was the case. When her mother Eva Hatzel took her to the doctor, the news was not good.

Alicia had torn her Anterior Cruciate Ligament (ACL), which meant she would not be able to play volleyball her senior year. According to Hatzel, this was not easy for Alicia to hear.

“There were tears and a whole lot of anger,” Hatzel said.

The injury not only kept Alicia from playing volleyball, it also prevented her from doing several summer activities, such as a missions trip to Mexico to build houses.

“I went from everything in my life being about my strength and about being able to be active to sitting for the first month and a half in summer doing nothing because I couldn’t even lift my leg,” Alicia said.

While the tear in her ACL prevents Alicia from playing on the floor, it by no means keeps her from contributing to the volleyball team in any way she can. Head coach Tammie Montiel said Alicia helps in a variety of ways.

“She kind of serves as our inspirational leader and kind of as an assistant coach,” Montiel said. “We use her to help in the drills that she can run, tossing balls and serving and stuff like that. She’s able to do that.”

Alicia attends all volleyball practices and games, and also attended the camps during the summer, although she could not participate.

Alicia does physical therapy to help rehabilitate her knee. One thing her therapy entails is working out on her own on days she does not have appointments with her physical therapist. Hatzel said Alicia’s doctor was so impressed with her dedication to her workout regime they lowered the amount of times she was required to meet with her doctor from three times a week to once every other week.

Alicia’s continued perseverance to work out and keep up her strength has greatly sped up her recovery process.

“She gets to start running one month to two weeks before other people usually do,” Hatzel said.

This perseverance has carried over to the way Alicia interacts with her fellow teammates. One person she works with more than others is the new libero Montiel brought up to play on varsity, sophomore Gabby Bryant.

“She helps me mentally and physically and in practices she helps critique me with constructive criticism,” Bryant said. “She helps me get my platform straight.”

While Alicia has continued to contribute to the volleyball team, her inability to play has been very emotionally taxing for her. It changed the way she viewed and described herself.

To help her look on the bright side, Alicia focused on her relationship with God and her family.

“I have to think, my value doesn’t come from being a super good libero or being super pretty,” Alicia said. “It comes from knowing God and knowing his love and having a good family around me.”

Although she is unable to participate in volleyball, Alicia hopes to play softball in the spring. Hatzel said Alicia’s continued physical therapy and her determination will have her ready to compete when the time comes.

“She is faithful with her physical therapy, so that will have her strong,” Hatzel said. “As soon as she can sprint, I guarantee she will be sprinting.”

Alicia is also involved in several other activities at the school. She is president of the National Honor Society (NHS) and a part of Key Club.

As president of NHS, Alicia organizes meetings and asks people to volunteer. She said it can sometimes be difficult to communicate with people, but hopes to use the experience to grow herself and others.

“Through that process I want to grow in character and scholarship. I want people to be growing in NHS.” Alicia said. “That’s why I’m glad to be president.”

Aside from extracurricular activities, Alicia is taking classes such as Certified Nursing Assistant, College Writing and Spanish IV while still maintaining a 4.0.

The way Alicia has made the best out of what others may view as a bad situation is an inspiration to her teammates.

Alicia has used the experience to realize that she is described by more than just her athletic ability. She looks deeper than the surface to describe herself.

“It’s impacted me a lot like how I think about myself and my identity. It’s not so much in my strength and my abilities, because that can go away at any time, and it has to be deeper than that,” Alicia said. “It just had made a really big difference in my life, that’s for sure.”