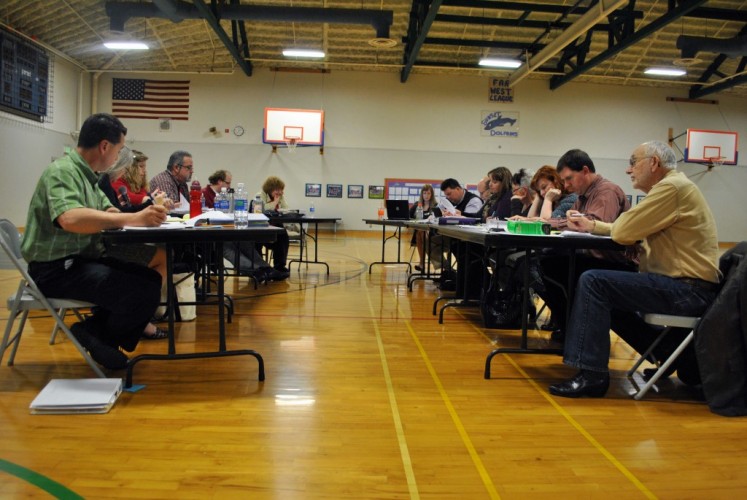 The morning dew still lingered on the green lawn of Marshfield as teachers began to quietly congregate in the circle in front of Pirate Hall, most of who were wearing red.

The teachers gathered, then departed just prior to 7:15 a.m., the official start time to their work day, as part of a work-to-rule action last month intended to show unity among them and spread awareness of how many hours teachers spend working each day outside of school.

Since last spring, certified staff members, which include teachers, nurses, counselors and some specialists in the Coos Bay School District, have been working without a contract. The district and the Coos Bay Education Association, the certified staff members’ union, have been trying to come to an agreement about the contents of the next contract.

“It provides rules that both sides, the district and us agree to, such as the evaluation process, salary, benefits, what happens regarding discipline, length of day, length of year and a lot more,” Sanders said.

Currently, the district and CBEA have not been able to reach an agreement on several issues, including language in the contract and compensation. CBEA members have expressed their wishes to the district and the work-to-rule action was the most recent effort to show their unity.

“Teachers work more than they’re paid a day. We are salaried and we understand that, but on the other hand, we spend a lot of time in our day doing our job of getting ready, planning, grading papers, and communicating with parents,” Sanders said.

The work-to-rule action also included the teachers leaving their buildings at the same at the end of the day.

Sanders believes if teachers arrived and left school at the same time everyday then it would be hard to have those close connections with students and their parents.

Since the district and union cannot come to an agreement, professional representatives have been requested to join each side in resolving the differences. The CBEA is being represented by OEA consultant Susan Anderson while Portland-based Jessica Knieling is representing the district.

“We brought in the representatives because they seem to move things along a lot faster; you know they do this for a living,” Coos Bay School District Superintendent Dawn Granger said.

“We’ve been bargaining since June. This is the longest I’ve ever been involved in bargaining a contract. We usually like to have them bargained before the contract expires,” Sanders said.

Though progress has been delayed Granger believes it has been peaceful.

“What’s most important is that students get their education and teachers get their compensation appropriately and that the district does its job for providing for all that,” Granger said. “I really value our teachers and I know it’s hard when you have to focus on contract items rather than people.”