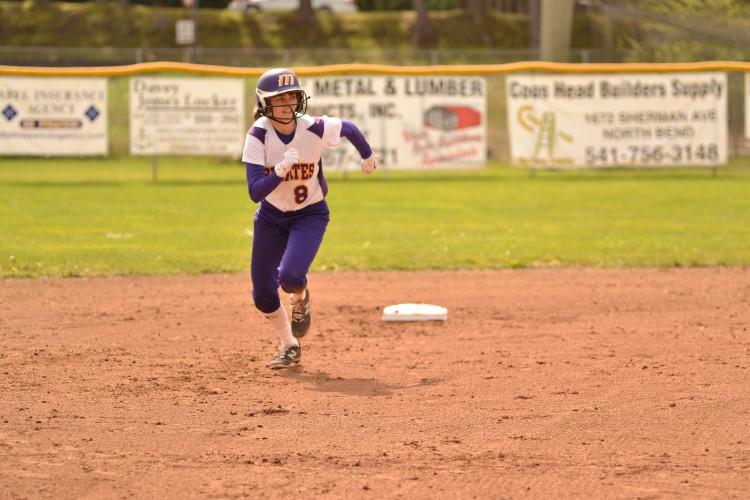 “Grab some fruit,” is a common phrase heard by students when entering the cafeteria. This is not because the lunch workers necessarily want them to eat it, but because the school is not reimbursed if all U.S. Department of Agriculture (USDA) requirements are not met.
For Marshfield to get reimbursed by the government, every student must get two of the three required food groups for breakfast and three of the five required for lunch.

Coos Bay School District General Manager for Nutrition Services Elisa Barcus, works for Sodexo. Sodexo is the company which provides foods services for the district. She said that the cafeteria would not be able to run if it were not for the government funding.

The USDA does not only define what students need to take but also defines what can and cannot be in the foods provided to students. There is a 63-page USDA manual that outlines the nutritional substances in foods for elementary, middle and high school grade levels.

With eighth graders on campus, Marshfield must comply with the eighth grade restrictions for all food and beverage options.

“Because we have eighth graders on campus we have to card students when they buy a coffee,” Barcus said.

This is because anyone who is not in high school is restricted from caffeinated beverages.

This does not just affect the food served in the cafeteria, but the food and drinks served in both the vending machines and the school café as well.

The only solution to be able to serve certain foods is to ask students for their I.D. when buying certain items in the café.

Since the café is a much different atmosphere than the cafeteria, Barcus is looking into making it as enjoyable as possible.

“When winter time starts we are looking at making soup and chili, but everything has to stay in compliance with USDA,” Barcus said.

Because Sodexo is a large company and has influential buying power, Barcus was able to purchase a Jamba Juice franchise and sell their products to students in the café.

Due to the fact that it would be very difficult to restrict who can and cannot buy certain items in the vending machines, many items such as regular sodas had to be removed.

Some students are not happy with both the size and content of the items in the vending machines.

Senior Vincent Tine said that he visits the vending machine about twice a week and finds it very frustrating when he is trying to satisfy his hunger or thirst while at school.

“Why do we have to have off-brand goldfish or diet soda? It is just obnoxious,” Tine said.

Tine said the limiting of items in the vending machines and cafeteria is attacking a problem that cannot be fixed simply by limiting foods and drinks at school.

Senior Casey King agrees that the government is trying to solve the obesity epidemic in America through the food at school, but thinks it should be solved differently.

“Yes, we have an obesity problem in America, but I’m not obese,” King said. “Maybe there should be a sensor in front of the vending machine that limits what you get based off of your height and weight.”

King said he thinks that the problem is rooted elsewhere because what students eat at home or off campus affects them much greater than what they eat at school.

“If I’m hungry I can go to McDonald’s and get two burgers for the same price as two small bags of Doritos. Limiting our supply of food at school is not the answer,” King said.

The USDA guidelines for vending machines also do not allow snacks to have more than 180 calories. This is not determinate on where the calories are coming from and whether or not they are healthy or not.

Assistant Principal Eli Ashton said it is very difficult to find a snack in the vending machine that has nutritional value and will fill ones stomach.

“It’s ridiculous. I can’t even buy trail mix out of the vending machines because it has too many calories, even if they are good calories,” Ashton said.

According to Barcus, the restrictions on food are going to continue to get more strict but she plans on making foods as enjoyable as possible for the students. She is also open to suggestions for ideas on new foods and can be reached at [email protected]

“Our focus in the kitchens has always been to make food that the kids like and want to eat,” Barcus said.