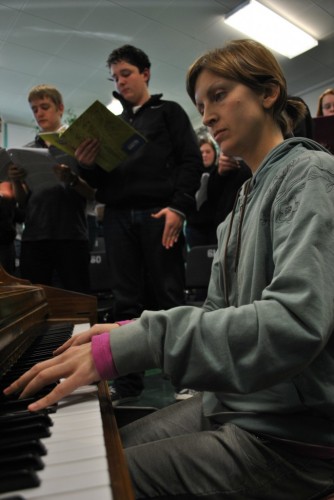 Esteemed accompanist Rachel Palen is now using her musical talent to amplify the Marshfield choir program. Life has brought Palen through many twists and turns ending up back in the Bay Area.

Born in Philadelphia, Penn., Palen and her family moved near Fairview, Ore. while she was still very young in order to pursue a more Bohemian life-style. She lived with her parents, older sister and brother in a house in the woods with no electricity. Being so isolated, Palen found music entertaining in her solitude and began playing piano at age six.

“There was nothing else to do,” Palen said. “My dad played the guitar and we’d sing together.”

Palen found herself writing songs and creating new piano compositions in that house. The piano continued to be a large part of her life even after she had moved to Coos Bay during her middle school years.

After graduating from Marshfield High School at age 16, Palen attended Southern Oregon University for two years on a music scholarship, originally planning to double major in psychology and music. Palen’s life changed when she was in a car accident while visiting Coos Bay on her first break from school.

Palen recovered, but her neck, back, and spine remain in pain when she puts strain on them.  She returned to school, after several months, but she said life was much more difficult,  forcing her to slow down.  Palen could no longer engage everything head-on like she had as an aspiring musician. She was also unable to handle the work that came along with her double major and had to focus solely on her music major.

“I just went right back to school,” Palen said. “At first I could only play [piano] for a few minutes at a time.”

Palen continued to attend college and transferred to the State University of New York during her junior year. During her time in New York, she proceeded to accompany soloists and play for theaters and concerts while attending school. She used her musical talents to augment their performances.

“Good accompanists are there to support the soloist,” Palen said.

According to Palen, it hurts her spine and neck to play the piano, but she continues to participate in her passion even with the physical pain that it is now paired with. She cannot however, become a full time professional choir pianist. Aside from the physical restrictions, it also became difficult for her to visually read and learn new music. She participated in therapy to help get over this obstacle.

“I had to go through vision therapy to relearn how to learn,” Palen said.

For her final year of college, Palen returned to SOU to learn from one of her inspirations, Alexander Tutunov, who was a pianist and teacher there.  When she graduated, she was acknowledged as SOU’s top performer.

After taking a long vacation around the country, Palen’s doctor told her she needed to settle because she could not physically withstand all of the traveling. Palen then moved to the Bay Area and began subbing at MHS, while attending massage school in order to become a massage therapist because she wanted to help people whom she could relate to because of her own accident. However, she eventually had to quit her job because she was physically too weak for it.

“I just felt like it gave me an insight in what it felt like for them,” Palen said. “Someday, hopefully, I’ll be able to do that again.”

Now Palen is the fulltime accompanist at MHS where she uses her skills to help the choir students improve their performance skills. Although she was halted by her accident, she also realized it benefited her as well. Palen believes because she had to reteach herself and find new ways to play the piano, it has actually made her a better musician. She also believes the accident helped her better realize previously unacknowledged aspects of her life.

“I started to appreciate the little things,” Palen said.

Palen first began working at MHS as the accompanist in 2005. Ken Graber had heard of Palen from her sister, who had been part of the Marshfield choir. After several requests from Graber, Palen decided to accept the position of the choir accompanist.

According to Graber, Palen is the perfect colleague because of their ability to work together. Graber said she also works well with the students.

“She brings out the best in the vocalists,” Graber said.

Even with her potential, Palen never had her mind set on a solo career. She enjoys playing with the Marshfield choir because it allows her to be part of something more significant. To her, helping the students is much more important than musical recognition.