By Ayasha Thurman | Features Editor
Natalie Hill recently pet a tiger, drove a Mini Cooper and was thrown a surprise party: just a few of the many experiences she hopes to accomplish on her “bucket list.”

Hill, 15, has been battling osteosarcoma, a cancerous bone tumor, since the summer of 2010, just before she began her freshman year at Marshfield. Following the amputation of her left leg and chemotherapy, she discovered in September the cancer had returned in her lungs, and she is now battling for her life. Hill created a “bucket list” with her best friend, sophomore Samantha Ring, and is in the process of achieving her goals. 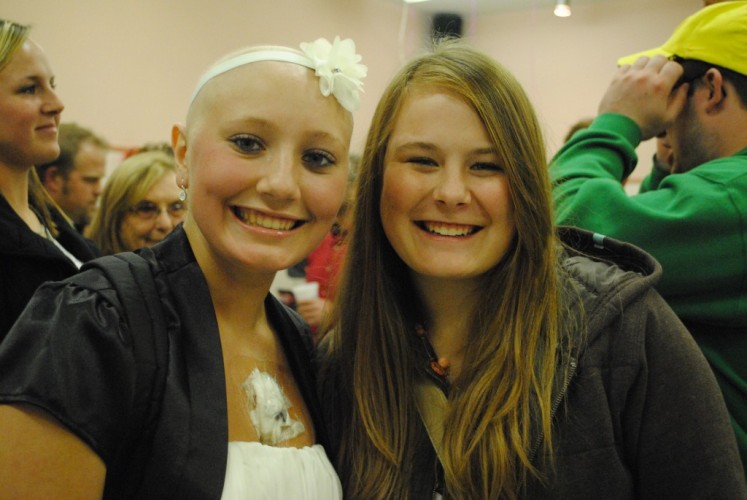 According to Ring, a “bucket list” is often created as a list of experiences or achievements one wants to attain and is not necessarily confined to doing before one “kicks the bucket.”

“It’s not like Natalie saying ‘I have to get this done in a certain amount of time,’” Ring said. “It’s just something she wants to do in case something happens.”

Hill’s bucket list contains 44 items, from meeting Taylor Swift to skydiving to snorkeling. Hill posted her list on her Facebook page, and she and Ring had shirts made that display the list on the back. So far, Hill has accomplished 14 things on her list, putting a line through each one as she goes.

Many of her closest friends are staying informed and involved in the activities. Sophomore Tracee Scott does not know if she has years or months to spend with Hill, but she is amazed by all the support out there for her friend.

“When you ask people if they know Natalie, some say, ‘I don’t know her personally, but I do know her story,’” Scott said.

Hill’s story is relatively well known throughout the community, but because of her Facebook updates page, “Natalie Hill Updates,” her story has gone world-wide as well. The page now has more than 14,000 “likes” or fans, which helped meet another goal of Hill’s to reach 10,000 “likes.” These fans are located all over the United States, Europe, Australia and Japan. She finds it overwhelming how many people know about her physical condition and want to help.

“I just want to thank you for all the support I have been given,” Hill said.

The offers of support she receives vary from simple encouragement about shaving her head, to advice about treatment options, to offers to make wishes on her bucket list a reality. Some community members have even arranged fundraisers to help with expenses related to the bucket list, such as one held Nov. 19 that included dinner, an auction and entertainment. The fundraiser raised $35,000, and Hill plans to use part of that money to take her family on a trip to Alaska so they can see the Northern Lights. “Team Natalie” t-shirts highlighting her bucket list are also being sold to raise money.

According to Hill, shooting hoops with members of the Portland Trail Blazers and acting as an extra on the new television show “Grimm” are in the works and will happen soon. She is thrilled, but even the simpler things on her list make her happy. Hill said placing a Pirate sticker on the car of her friend Michael Hobson, a North Bend High School student, is her favorite achievement so far.

Hill continues to look for and enjoy the positive aspects of her life despite the uncertainty of her medical condition. She feels there is no point in being negative and is amazed by people who cannot believe she remains optimistic for the future.

The support of Hill’s family, including her mother, father and sisters, has helped her maintain her positive attitude. Throughout Hill’s illness, her sister Natasha Hill, a senior, has stayed by her side. Natasha is amazed her sister can take any negative situation and make it positive. She has not gotten personally involved in the “bucket list” activities due to the many people who want to help, but Natasha is still completely supportive.

“I just want her to be happy and achieve the goals she has,” Natasha Hill said.

Hill looks toward the future and beyond fulfilling her bucket list, she also hopes to play basketball next year for the Pirates. Scott admires her strength and wants Hill’s story to be told.

“She is the definition of a great person,” Scott said.