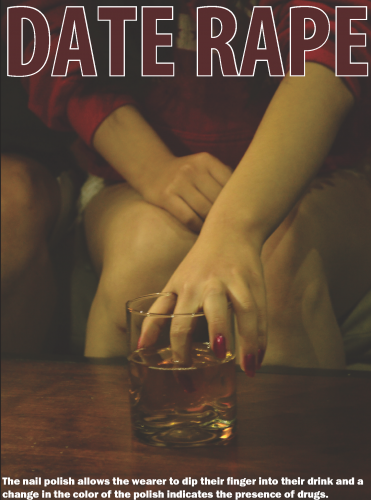 An invention by four college students in hopes of reducing the incidents of date rape, uses nail polish that can detect the presence of common drugs used by predators in date rape crimes when immersed in one’s crime.

One out of every six women experience attempted or completed rape in their lifetime, according to the Rape Abuse and Incest National Network (RAINN).

The idea of a date rape nail polish has been gaining popularity recently. The idea sprouted from four college students who were doing an assignment for one of their science classes. The concept is that when a woman decides to go out somewhere, she can wear the nail polish and use her finger to stir her drink. If her fingernail polish changes color, her drink has been drugged.

“It is a fascinating idea, and I’m sure the chemistry behind it is amazing,” Crombie said.

As the subject gains momentum over social media and other means of communication, opinions about the nail polish have arisen from many people.

Sophomore Katie Sharp said she thinks the polish could be useful.

“I think it’s a good idea. If it’s a stylish color, girls can rock it all the time,” Sharp said. “It could help a lot.”

The intention of the polish is to protect women when they decide to go out to a party, bar or other social setting. Spanish teacher Mark Lorincz said while the polish is a good step to take, he ultimately believes the best way to prevent rape is to avoid potentially dangerous situations altogether.

“It’s just like a seatbelt. It’s an easy precaution to take, but I think the best measure you can take is being aware of your surroundings and not putting yourself in a situation where someone could take advantage of you while you’re in a bad state of awareness,” Lorincz said.

“It’s a good idea,” Haut said. “But in the same sense of birth control, you should still be careful because there will always be a risk.”

Speculation has risen over whether it is sexist, because nail polish tends to be a more female-oriented product, but Sharp and Lorincz both agreed more attacks happen against women than men in today’s society.

“Men also get raped, but it’s not as common,” Sharp said.

Only one out of 33 men have been taken advantage of when discussing the topic of rape, according to RAINN.

Sharp and Lorincz both said the nail polish is a step in the right direction. They also said they hope it will be used as a precaution in Coos County as well as other areas. Lorincz and Haut both said they think it will be more applicable in college towns, such as Eugene or Corvallis, but they are pleased with the idea itself.

“I think the fingernail polish is a Band-Aid on the problem. It won’t solve it,” Lorincz said. “Education is the only way we can help our young males make the right choices.”