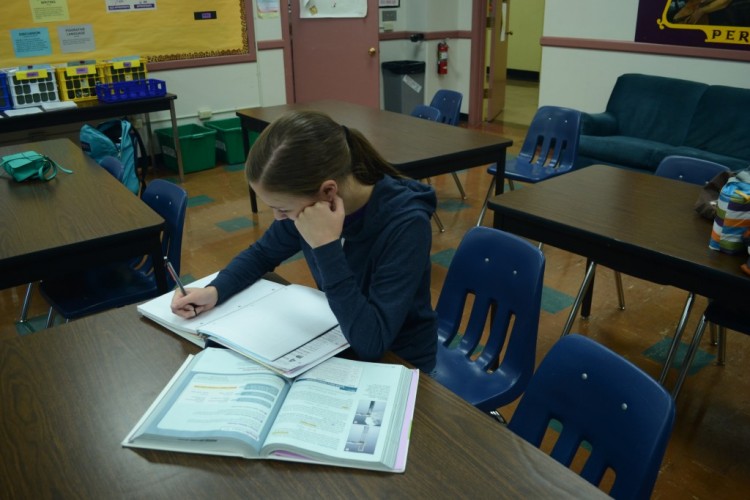 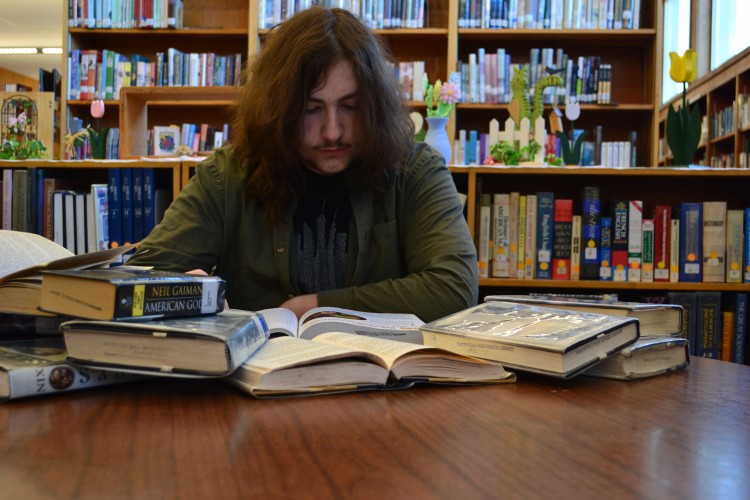 With knowledge comes some sort of enlightenment.

Sophomore William Crombie has always had an intense love for literature. Some of his favorite genres include historical fiction, fantasy, poetry and physics. In a perfect world, Crombie said he would go to Oxford for literature, Harvard for philosophy and Massachusetts Institute of Technology (MIT) for physics.

“Primarily I love to read. Reading has been my passion my entire life,” Crombie said.

Crombie volunteers at the Coos Bay Public Library one to three times a week in his spare time, to give back to a place he cares about.

“I’ve spent so much of my life there and I love the books there so much, I thought I’d give back to it,” Crombie said. “They don’t get enough support from the community, and they don’t get the appreciation they deserve so I thought I’d help out.”

Ellen Thompson, another volunteer at the library, said she has watched Crombie grow up at the library and was thrilled at the idea of him volunteering.

“He is willing and able and pretty much willing to do anything,” Thompson said. “He doesn’t require a great deal of supervision.”

English teacher Luke Parrish said as a freshman, Crombie approached Parrish and told him he was excited about being in his class because he knew Parrish liked books.

“I have found him to be, of all the students I’ve ever had, and I’ve had quite a few students who read a lot, I don’t think I’ve ever seen one who has read that much,” Parrish said. “I think the depth and breadth of his reading is a really remarkable thing about him.”

Crombie has been involved in New Horizons, Pirate Underground, forensics, band, concert choir and swimming. Although he did participate in swim team, Crombie said he considers himself more of an intellectual than an athlete, even though he enjoys hiking and kayaking.

Aside from reading and exploring nature, music has always been a large part of Crombie’s life. He said there is a wall in his house covered in over 6,000 CDs and he likes to call it the wall of infinite music. Crombie said his home has always been filled with music.

“Music is just one of the most wonderful things in existence. I think it is part of what makes us human,” Crombie said. “It gives us emotion when there isn’t enough and it helps us control it when there is too much, and I can’t express how important it is to me.”

Junior Crew Berggren met Crombie last year in Spanish. He said he enjoys conversing with Crombie because of the way he thinks.

“He is very thoughtful. He doesn’t say things that don’t have any reasoning behind them, he always thinks about things,” Berggren said. “He’s a deep person.”

Parrish said he is waiting for the day Crombie discovers his true passion in life because no matter what he does, it will be extraordinary.

“Discovering your passion is for everybody, but when William Crombie discovers his true passion, look out. It’s going to really be something to see,” Parrish said. “I’ll be curious to see what happens when Mr. Crombie discovers his passion because he has such a mind to put to it. I think it changes people when they find out what they really want to do.”

Crombie said one of the biggest things that has haunted him all his life is his need and want for meaning. He said knowledge and studying philosophy is part of him finding that meaning.

“I guess I’ve always loved knowledge for some sake. For a long time the meaning I ascribed life was  to get as much knowledge as possible and I guess that is part of the reason, because I think that with knowledge comes some sort of enlightenment. But I just love learning new things, I love getting a deeper understanding of the things around me,” Crombie said. “I have a hard time living in a universe where there is no point or purpose.”

Crombie also said for there to be any sort of meaning, one must achieve immortality in some way.

“I think the only way for there to be any sort of meaning is for some way or another to achieve immortality. The easiest way to achieve immortality is immortality through legacy. This is both the easiest to obtain and in some ways the hardest in others,” Crombie said. “We are all living under the shadow of our personal apocalypse. We will all die someday and I think that if everything that we ever do and everything that we have ever done will be dust blowing around on a desiccate planet, orbiting a red giant, where no life will ever live again, then there isn’t a lot of point. The only way to find meaning is somehow make it so that the human race can preserve itself and find its way outside of the solar system and maybe even a way outside the universe.”

Crombie said he wants to make a difference in the world to change the course of humanity in a way so humans will preserve their legacy.