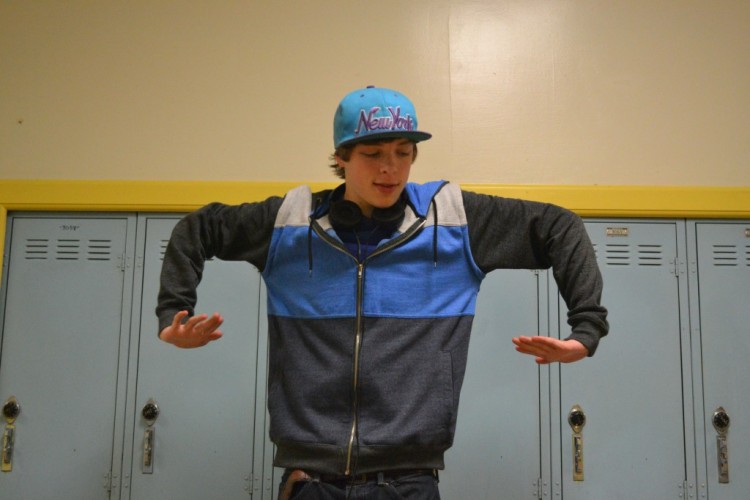 Pop, lock and drop it.

Senior Christian Chase has always been an energetic and creative person. He is the president of the Marshfield Theater company, a bass drum player in the drum line and, most recently, a dancer. When he is not busy with acting or performing in band, one is likely to find him moving exuberantly through the halls with his signature blue hat on. Chase’s interest in dance began around the time of his sixteenth birthday.

“I started to like dancing at the end of sophomore year,” Chase said. “It’s extremely fun to do.”

Chase became interested in “popping” when he began to watch Stefan Clemente, a street performer with the stage name “Mr. Wiggles.” Clemente is well-known for popping, a form of dance that involves flexing and contracting muscles. Clemente inspired him to become a dancer and also helped him learn how to dance.

“I watched Mr. Wiggles. I would just try to repeat things he would do,” Chase said.  “I was like, ‘Oh my gosh, how can he move like that?’”

Although he discovered something he enjoyed doing, he was worried about how his family and friends would react to his newfound hobby.

“I used to lock myself in my room, and I used to dance in front of the mirror quietly because I was afraid what people would think, but when I danced in front of people their reaction became something that encouraged me,” Chase said.

Most people supported his growing interest and he even found it has helped him become a better person. English teacher Kelly Haut said dancing has positively influenced Chase’s life.

“[Before dance] picture him a teeny, tiny ant that zigzags all over the place,” Haut said.

“Now he’s very focused, determined and a leader to students. I’m very proud of him.”

Chase said he hopes to pursue dancing along with acting, his other infatuation. He has recently taken a leap toward his dream by acquiring a job at Synergy Dance, a local dance studio, where he teaches hip-hop classes. Chase said he enjoys teaching and hopes to see familiar faces attending his classes.

“I was kind of hoping people from Marshfield would come down and learn from me,” Chase said.
Chase recently had the opportunity to perform in front of his peers as a guest dancer in one of the Marshfield Upbeats performances.  Coach Debbie Brown said Chase has talent that is rarely found within the community.

“He has skills that no one else at Marshfield has,” Brown said. “If he wasn’t such a great guy I wouldn’t have let him do it.”

Although Chase has come a long way, he said he still has plenty of hard work ahead of him. However, Haut said she believes he will be able to fulfill his dreams.

“Christian has always been an energetic and creative person,” Haut said. “If he sticks to it he can accomplish anything.”